60 Books and Counting in Seven Years!

Self-publishing facilitator Write-On Publishing of St Francis Bay, has recently recorded yet another important milestone - 60 books produced under the dual imprints, Write-On Publishing and SA Catholic Online Books, since very humble beginings in 2013.
The first book produced by SA Catholic Online in 2013 was what we would today call a “chapbook”. It was a small, 60-page collection of short stories called “Via Dolorosa”, written by then St Francis Bay poet and author, June Ann Jansen. The stories were fictional accounts by “eye-witnesses” of the events around the Passion and crucifixion of Jesus Christ.
“Via Dolorosa” was followed in 2013/14 by a seven-book series by Johannesburg Catholic lay theologian Michael Mahony called the “One of Us” collection. This series of books represented an incredible editing and typographical challenge and learning curve to fledgling editor and Adobe Indesign typographer, Frank Nunan - interlinear Greek and English text, Hebrew text, complicated tables and graphics, endnotes, and much more! These books were all produced within a two-year period.
The initial focus was on Catholic books, and there followed a string of books by priests, a deacon and lay Catholics, crowned by the production of a book for Archbishop Buti Tlhagale OMI “Pastoral Letters on Mary and Matters Ancestral”. An article in the Catholic weekly newspaper called us “The Priest’s Publisher”!

Early in 2017, a decision was made to broaden operations into the secular sector, and Write-On Publishing was born. The first book under this imprint was also by a local St Francis Bay author, Mike Silberbauer, for whom we published “Secrets of a Walking Stick”, a collection of whimsical reflections on “life in the Village.” This was immediately followed by his second book “A Cottage in St Francis Bay”.
Mike was so happy with the results that he had no hesitation in referring Write-On to renowned author of Eastern Cape travel and history books, Bartle Logie. Bart’s previous publisher had retired and he was agreeably surprised to find a replacement right on his doorstep in St Francis Bay. The association with Bart is on-going and has resulted in the publication of two books, “Toasted Marshmallows & Obies” and “Tales from an Unmapped Country”, as well as the re-issue of two older books.

In 2018 we took a slightly different turn - the re-construction and re-issue of old, out-of-print books.
We were approached by the Jeffreys Bays Seashell Museum (managed by the Humansdorp Museum Association) to see if we could re-do a little book which had gone out of print: “The Sea Shells of Jeffreys Bay”. This was a tricky assignment, as the book consisted of high quality colour plates of the shells, the originals of which were not available, as well as many columns of Latin and technical names and descriptions.
The book turned out so well - some said it was an improvement on the old one - that the Association later approached us to re-issue “Humansdorp se Groei en Bloei”, an Afrikaans history of the town of Humansdorp.
Another four “new books from old” were produced, inlcuding “Okavango Memoirs”, a re-named re-issue of the 1956 book “Always Lightly Tread” by E Cronje Wilmot, “A Taste of St Francis” - the re-issue of two little St Francis Bay recipe books from the 1990s, amalgamated into one book, and “Recipes of Bechuanaland”, the re-print of a 1958 community book. The final one was “Black Review 1974/75”, the re-issue of a previously banned Black Consciousness annual.

Our ability to offer very short run printing and our competitive fee structure has enabled us to produce a number of books for people who wish to write books for a select, very small target audience - just family and close friends, for example. Our successes here have included private recipe books, and very personal memoirs.
Foreign & Multi-Lingual Books
Write-On Publishing has produced two books in French, as well as a prayer book in three languages (English, Zulu and Sotho) and a small poetry book in English, Afrikaans and Xhosa.

In 2019, Write-On Publishing launched an initative aimed at first-time authors for the prodction of “Chapbooks”, defined as publications of up to about 48 pages, usually poetry, short stories or children’s stories. The name “Chapbook” is derived from the 16th and 17th Century when it referred to small popular leaflets and pamphlets sold by street peddlers known as “Chapmen”. Four such little books have been prodcued to date, with a number in the pipeline.

The Bechuanaland and St Francis Bay recipe books were also our first forays into producing our own books “at risk” - that is, without a customer/author to pay fees. December 2018 saw the launch of “Impressions of St Francis”, followed in short order by “Impressions of Jeffreys Bay” - both photographic journeys through these two seaside towns. The pictures for the books were sourced from locals and vistiors via web-based competitions.
Most recently, Frank Nunan has compiled the Catholic lexicon “Do You Speak Catholic?” which gives meanings and explanations for words used in the Catholic religion.

The 60th Book was “Cock Tales on the Kowie”, a 200 plus page book by Sue Laburn Gordon and Ed Cock, an historical documentary of 1820 Settler leader and entrepreneur William Cock - the man who moved the Kowie River to create a harbour! 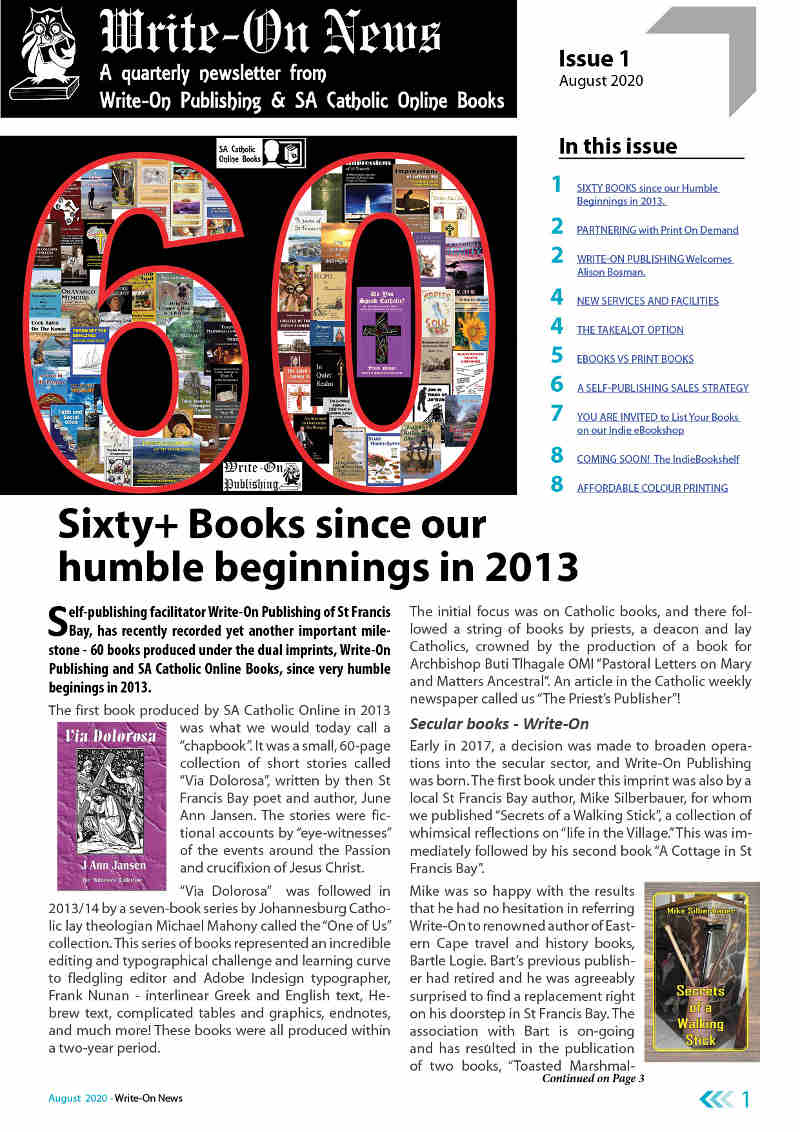